The Impact of Arras: The Hayworth Family In The First World War

By Euan Loarridge, PhD candidate in History at the University of Glasgow 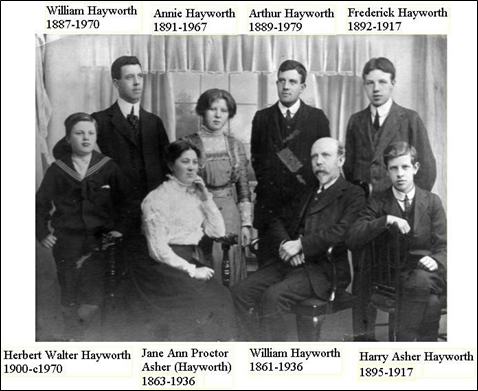 Annotated photograph of the Hayworth Family taken around 1910. Seven years later, this family would be irrevocably changed by the Battle of Arras.

On April 15th 1917, Second Lieutenant Harry Asher Hayworth was killed in action during the 1st Battle of the Scarpe, part of the wider Battle of Arras (April 9th – May 16th). Less than a month later, on May 12th, Harry’s elder brother, Second Lieutenant Frederick Hayworth, was also killed in action, near the village of Monchy-Les-Preux, just to the south-east of Arras. The two brothers who had lived together, studied together at the University of Glasgow, enlisted together in the Glasgow Highlanders, become officers together into the Argyll and Sutherland Highlanders and trained together throughout 1915-16, subsequently died together in the same offensive.

As part of the 2014-18 Centenary Commemorations, Harry and Fred’s story has become the focus of research at the University of Glasgow, teaching at Lenzie Academy and now a short segment on BBC Radio Scotland as part of the World War One At Home series. Biographies for both brothers, recently updated for the anniversaries of their deaths, can be found on the University of Glasgow Online Roll of Honour. This post will expand on their story by reflecting on the support the rest of the Hayworth Family provided Fred and Harry during the War and later how they dealt with their deaths.