By Ellen Embleton, Club 21 Intern and undergraduate student in History and English Literature, University of Glasgow

With the global significance of the Great War, the input of a small community like that of the University of Glasgow could very easily be marginalized. Glasgow University’s Roll of Honour, however, refuses to let this happen in its efforts to commemorate the life of every student and staff member who fell in the years between 1914 and 1918, as well as those who served and survived. It is this restoration of the human element to the Great War that inspired my involvement in writing Roll of Honour biographies. With the passing of the last of the WWI veterans, the lives of these servicemen may seem, more so than ever, very distant from our own. Yet many of them studied the same subjects as I study, had the same aims as I have and even lived on the same road as I live on now. Glasgow University’s Roll of Honour reminds us of these similarities and allows us to glimpse the people and life behind the action of the War.

END_OF_DOCUMENT_TOKEN_TO_BE_REPLACED

The Pìobaireachd Society: Introduction to the WW1 material

Between 2014 and 2018 marks the centenary of the First World War and public attention has turned increasingly to remembering events both at home and abroad. Here at the University of Glasgow, names continue to be added to the Roll of Honour, telling the stories of those in the University community who fell during the war.

Yet what was life like for those at home during these tumultuous years? How did life change and what challenges did they face?

As part of my placement with Club 21, I’ll be researching the effects of World War One on the Pìobaireachd Society. Pìobaireachd (or Ceòl Mòr, literally meaning ‘big music’ in Gaelic) refers to the classical side of piping, consisting of a theme (ùrlar) and variations of this theme.

Formed in 1903, the society is still going today and aims to promote the classical side of pipe music through collecting pìobaireachd manuscripts and the publication of books. You can read more about them here.

The Pìobaireachd Society received payments from the War Office for the tuition of pipers, as this letter shows.
(DC80/372/21) [click to enlarge]

The Archives Services holds a number of the Society’s letters: correspondence between the members that was written between 1903 until 1921. They were found amongst papers relating to the Garscube Estate that was owned by Captain Campbell of Succoth, who was also an active member of the Society. They offer a fascinating insight into the daily workings of the society and I will be focusing on the correspondence during the war years.

Pipers were very much seen as being the backbone of the Army: often, they were the first to march ‘over the top’, piping the rest of the soldiers into battle. This had been going long before 1914, especially in Highland Regiments. As we will see over the next few weeks, it continued to be a priority for the Pìobaireachd Society to teach men to a high standard of playing to provide this service in battle.

We will also find out the impact of the war on the Society and its members and their plans to commemorate the fallen when the war was over.

Letter to the Society from December 1914. Regrets to inform them that he’s ending his membership, “owing to financial considerations due to the war.” As the war progressed, more letters similar to this followed. (DC80/372/78)

Keep an eye out for more blog posts about the Pìobaireachd Society during World War One in the following weeks. In the meantime, if you would like to visit the collection for yourself or have some information about the society that you would like to share, please contact the Duty Archivist by emailing: enquiries@archives.gla.ac.uk.

On Monday, 4 August the UK commemorated the centenary of its entry into the First World War. With the close of the Commonwealth Games just a day before, Glasgow became the locus of Commonwealth centenary commemoration. Following a memorial service in Glasgow Cathedral, officials, members of the armed forces, and dignitaries from around the Commonwealth attended a wreath-laying ceremony at the city’s cenotaph in George Square and a reception in City Chambers. 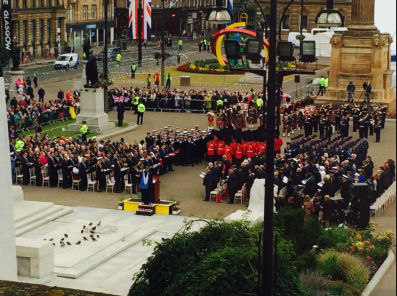 END_OF_DOCUMENT_TOKEN_TO_BE_REPLACED

My work as a battlefield archaeologist has brought me as close to the realities of the Great War as it is possible to get, one hundred years after the fact. I have excavated trenches at various locations on the Western Front, as well as mass graves at Fromelles, in French Flanders. In 2008 I was also privileged to accompany Harry Patch, the last man alive to have fought on the Western Front, as he made his final visit to Flanders, to unveil a monument at the place where he went over the top at Passchendaele in 1917. 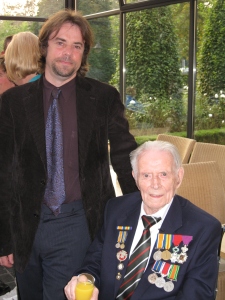 END_OF_DOCUMENT_TOKEN_TO_BE_REPLACED

This project is primarily about sharing the stories of those who walked, or even marched, on the beautiful Gilmorehill campus before us. It is about remembering our own community in the “war to end all wars”. We want to tell of the individual staff and students, the soldiers, nurses, engineers and even the diplomats and spies who made Gilmorehill what it is today.

Our University has long embraced diversity. Those who have been displaced from the collective wartime memory – the women doctors, the conscientious objectors and our alumni who fought for Germany and her Allies – will be remembered as part of this Project.